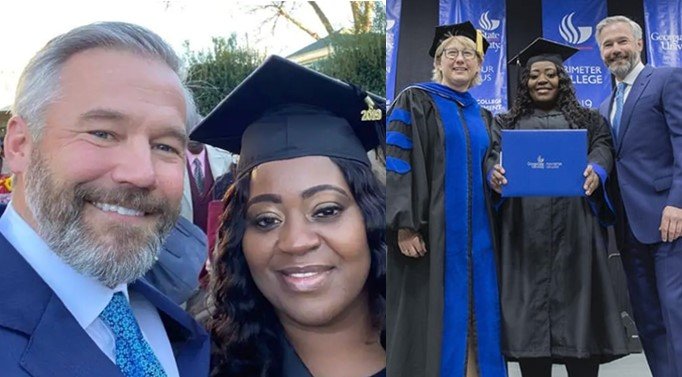 Information reaching us has it that a woman identified as Latonya Young witnessed a turn around in her life when a random Uber passenger eventually became the person who changed her life for good.

When she received a request to pick a passenger named Kevin Esch, she had no idea it was her path to achieving a lifelong goal.

As a driver with the ride-hailing service, Latoya, a mother of three, was in the habit of talking with her passengers to make them feel easy and enjoy the ride.

It happened that during the talk, the two exchanged a lot about themselves, with Esch revealing his divorce and Latonya disclosing that she had dropped out of school and really needed to rejoin but was short of money.

The 43-year-old dropped out of school at age 16 when she gave birth to her now 26-year-old son, as reported by the Atlanta Journal-Constitution.

Without informing her, Esch made the pending fee balance of $700 (N286,930), allowing Latonya to re-enrol at the Georgia State University.

Esch said: “I’m proud of her. She’s done an amazing job to make it this far. Through the pandemic, through virtual schooling, through everything. It’s amazing.”

Latonya, who graduated in May 2021 with a bachelor of science in criminal justice, is forever grateful to the proverbial Good Samaritan who made the seemingly impossible become possible for her.

Latoya received her diploma from Georgia State University on May 6.

The lady expressed her joy, calling it the best feeling in the world and one she cannot explain because she never envisioned herself being where she currently is.

Soon after her graduation, Latonya released a book titled “From Broken to Blessed” set to be released in two weeks.

She said that her dream is to become a federal probation officer, adding: “I pray to God that I get a good job opportunity that pays well so I can pay my loans and take care of my child. Whoever has a good-paying job for me, that’s the goal.”