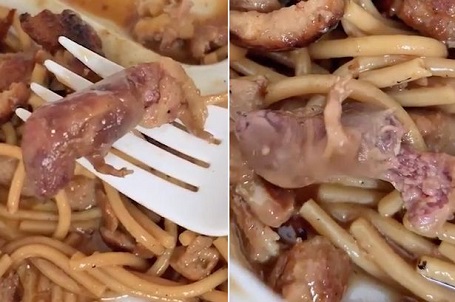 A woman was absolutely disgusted to find what she says is a dead baby rat cooked in her chicken teriyaki takeaway.

Deyanira Cortes who lives in Columbus, Ohio, posted a video on Facebook showing what appears to be the dead animal mixed with her noodles.
In the footage, she picks up the ‘rat’ with her fork and shows people the ‘little hand and face,’ saying how ‘foul’ it is.

Deyanira says she wants people to share the video as a warning not to go to the takeaway – insisting “this is a rat” and saying she “can’t believe it”.

She claims she bought the food from Yihi Japan in the Polaris Fashion Place shopping mall in Columbus.

According to Fox News , the restaurant has been closed by the health department after an investigation into a complaint of a rat in the food.

Although no rodent activity was found, investigators did find other issues which caused it to be shut, including evidence of cockroaches, the report said.

“I bought a chicken teriyaki and got a rat fetus cooked in the food it’s disgusting.

“Please share so no one buys from there and we can avoid someone getting sick.”

In the video, the woman says in Spanish: “This is incredible. Look what’s been found here in this – a cooked rat.

“It’s a chicken teriyaki  I bought from the mall in Polaris Pkwy.