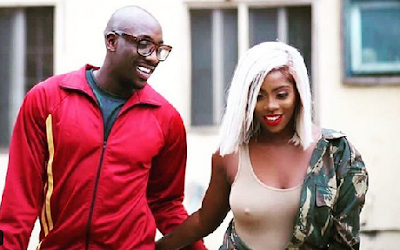 Lol. Tiwa Savage has announced a new collaboration with fellow African act, Sautisol. She posted the above photo saying people should wait for the collabo saying it’s going to be Savage, but what everyone saw was the nlpple.

What generated comments was the nipple. And people just went on and on and on discussing the n!pple. Some called it a DOT, some GEMSTONE, some asked if it was actually a nipple and mehn the list went on. Couldn’t concentrate in bringing all the comments but I brought you guys few. And has expected people criticized her saying she’s a married woman and has no right to go out braless. Phew! Sigh!! Some of the comments below…

iamclobis3k3 Was the nipple display a mistake or part of the swagga? To him whom much is bequeated more is expected

romaineayena@ajibareolaniyijoel yes you are right. And when the African women start beating their husbands like those white and American women do, you will be the first to crucify them. We can’t be them. We have culture and tradition. We have moral. I don’t judge what she wears because it is her life but I can’t accept people comparing us to those Americans and European women. We are different.

sholly_boyI refuse to see what ya’all are seeing..it’s too early to be nothing that dot in 2018…..all I see is the sauti Sol guy…..

mrprince_official@blissybae My Love I swear The Nipples Got me….. You know I have a man of his own down there

iamestellejaneThere is absolutely nowhere u would try to look in this picture that ur eye won’t notice dat DOT. The Dot is the star of this picture it’s just seeking attention anyhow, trying to steal tiwa’s shine. It’s so bold & strong like: see me o see me o