At least nine individuals are now laying claim to the commission entitled to the person responsible for the information which led to the recovery of N13 billion from an apartment in Ikoyi, Lagos. 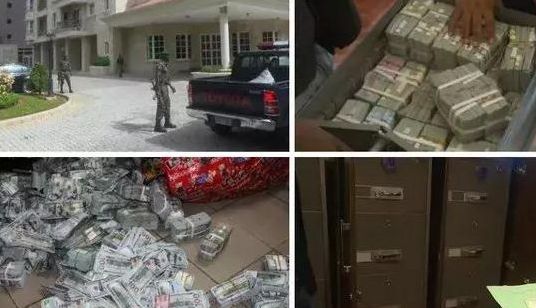 The Economic and Financial Crimes Commission recovered the money in April, following a tip-off.Under the whistleblower policy, the individual who gives information is entitled to between 2.5 percent and 5 percent of the recovered loot.

But the payment is yet to be made, even though the government has promised to release the money.

In a petition to the attorney-general of the federation, some whistleblowers accused EFCC officials of attempting to shortchange them by introducing those who were not among the informants.

PR Nigeria obtained and released the petition to the media on Tuesday;

“Our clients informed us sometime in December 2016 that three (3) of them voluntarily walked into the office of the EFCC at 15A Awolowo Road Ikoyi, Lagos and gave vital information that led to the recovery of over N13 billion at the Ikoyi Towers, Lagos,” the petition read.

“Upon subsequent visit to give a detailed information as required by the commission to raid the tower, they were told if the operation was successful, 5% of the amount recovered will be their take-home within 72 hours of recovery, they were also cautioned that if the information happened to be false, then they will definitely be in trouble which the three mentioned above accepted because they were sure of their facts.

“That when the operation was carried out, it was successful but since then they have not received any commendation by the commission, let alone give any reward as stated even though the EFCC have their names and phone numbers”.

The petitioners said rather than doing the needful, some EFCC officials said there were people involved in the deal whose names had not been mentioned.

They said Samaila Muhammed, head of EFCC operations, told them the number of whistleblowers had increased to nine.

Reacting, Yinka Akintunde, media aide to the minister of finance, said such issues should be referred to EFCC because it is not the responsibility of the ministry.

Akintunde said the ministry would only come in when the right persons had been identified.
Several persons had approached the commission to say they were part of whistleblowing.

Wilson Uwujaren, spokesman of the EFCC, explained the role of the commission on the matter. He was quoted as saying the commission had records of the original whistleblowers of the Ikoyi Towers.

“All will be done to make sure that the right persons are paid accordingly,” he reportedly said.

Meanwhile, the petitioners are heading to court to stop payment to those they called “wrong persons”.